All / Dog Camera
Forbes: The Furbo Dog Camera Just Got Even Better With Its New Dog Nanny Service Necessity truly is the mother of all invention. When Maggie Cheung and Victor Chang left their toy poodle, Gobi to go to work every day it brought on massive guilt. That’s when the light bulb in their heads went off. The couple realized that if they could create a product that solved this common problem that it would be an instant hit. And they were right. 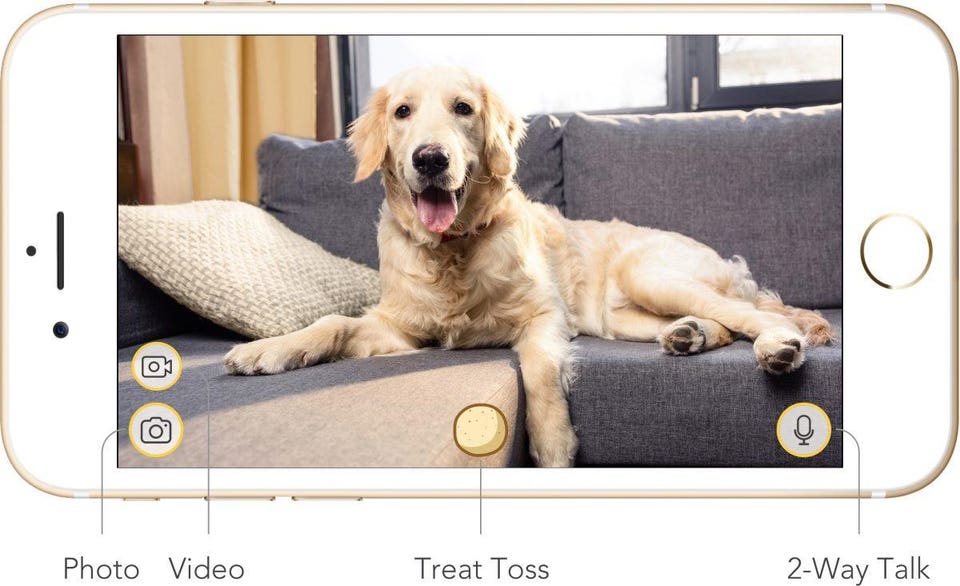 In April 2016, the husband and wife team launched a crowdfunding campaign on Indiegogo for the Furbo Dog Camera, the world’s first treat-tossing camera designed just for dogs, that lets you see, talk, and toss treats to your dog when you’re not home, and in the first six hours, they hit their funding goal. When the campaign closed in June 2016, Furbo had raised more than $500,000, which caught the attention of the folks at Amazon. By October 2016, the product was available on Amazon’s website and has since become the best-selling dog camera in ten countries and Ellen DeGeneres’s number one gift on every dog lovers’ Amazon wish list.

Furbo just launched their Furbo Dog Nanny service for even more peace of mind for your pet. “About a year ago, we asked ourselves ‘what's everything a dog owner would want from a smart device?’ Then we realized that was the wrong question and asked ourselves ‘what's everything a dog owner would want from a human pet sitter?’ Feeding the dog. Walking the dog. Cleaning up after your dog. These were all important, but at the most fundamental level, it was to keep your dog safe. That's what led us to Furbo Dog Nanny. At this stage, there are many limitations to what a smart device can do in comparison to a human. But there are categories of activities that a device can do better and far more cost-effective than a human and we wanted to build on that,” states Andrew Bleiman, General Manager of North America for Furbo Dog Camera. Bleiman, continues, “Furbo Dog Nanny doesn't sleep. It doesn't get sick. It doesn't get bored. It doesn't get distracted on phone calls. In some very real respects, Furbo Dog Nanny is far more reliable than a human when it comes to watching your pet 24/7. That said, even the most attentive Furbo user can't watch his or her dog all the time. Some of our users try! The average Furbo user checks in on their pup 11 times per day during the workweek. We have some users that simply leave the app open and their phone propped up on their desk and monitor a continuous stream throughout the day. So we built Furbo Dog Nanny with cloud recording, Smart Alerts and Doggie Diary to ensure Furbo users never miss a moment of danger, joy, or curiosity from their dog's day. We also tried to build Furbo Dog Nanny into a fun, interactive service that captured a bit of what you want to know from a pet sitter when relieving them as opposed to a cold, impersonal security monitoring service.”

The company is constantly looking for ways to improve what a human pet sitter would do and perform it even better. Bleiman tells me, “AI is key to Furbo making sense of and recommendations in ambiguous situations, which humans are pretty good at. Currently, we use AI to differentiate between pets and humans, between a bark and a shout, between dog activity and other activity, etc. While not yet deployed, we are also using computer vision, audio intelligence and machine learning to differentiate between different types of dog behavior, barks (of which there are 5 to 20+ distinct types depending on what researcher you ask) and potential hazards within a room. Out of this will grow AI enabled behavioral, health and wellness, and training applications within Furbo Dog Nanny. We use anonymized customer data to understand how different segments of our user base use Furbo and identify problems early. Our users generate millions of hours of video and audio data each day, so there is a lot to work with!” With the Furbo Dog Nanny you get additional features including 24/7 alerts that provide activity, barking, person, and selfie alerts, cloud-recorded videos triggered by activity, barking, or people in the frame, and Doggie Diaries, a ninety-second time lapse of highlights from your dog’s day. Bleiman tells me, “When we decided to add automatic 10-second video recording of dog activity, barking and person alerts with Furbo Dog Nanny, we recognized that many users would receive 20, 50 or even 100 videos in a single day. That's a lot! People love watching their dogs but we worried that reviewing that many dog videos could get tedious. So the Doggie Diary concept was born to provide a way for users to quickly review video, and is part of the Furbo Dog Nanny service. User validation, early and often, is core to our product development process. So, like all potential new features, we put some Doggie Diary mock-ups in front of testers for feedback. What we didn't anticipate was the immediate smile it brought to every testers' face. Every single tester thought it was a lot of fun and should be included even if they were reviewing all their videos individually throughout the day.”

When I ask Bleiman what kind of funny or unusual behavior he has seen he responds, “You name it, we’ve seen it. On the top of the naughty list, we've caught dogs hopping onto kitchen tables, shredding shoes and attempting to hide the evidence, and more. That said, we're most proud of the moments of doggie-danger averted thanks to Furbo, including dogs eating pounds of chocolate, kitchen fires, even burglaries in progress!” One of the most surprising things for owners is how much their dog barks or howls while they are away. Thielman continues, “Being alone for a dog can be challenging. Furbo is often recommended by dog behaviorists and veterinarians to help manage separation anxiety.” Introducing the Furbo 360° Dog Camera: Stunning Full HD Camera with all-new rotating 360° views
It’s easier than ever now to keep your dog safe and happy when you’re not at home. The new Furbo 360° helps you never miss a beat, a zoom, or a dog selfie with the full coverage of a rotating 360° view.
Read More Train your dog to stay at home with Furbo
The Furbo dog camera is a stranger to your dog so it’s normal for your dog to be apprehensive or aggressive towards it. As a pawrent, your job is to introduce the camera to your dog so they understand that they can get treats and interact with their hoomans through this machine. So here’s how you can introduce your furry friend to Furbo and train your dog with it.
Read More What Sorts of Mischief Is Your Pup Up To At Home?
Our dogs mean the world to us, even when they're up to no good at home while we're away. Check out these hilarious #CaughtOnFurbo moments shared by pawrents around the world!
Read More
Never Miss Out!
Subscribe to our newsletter to know more about how to bring joy to your dog.
We will never spam you.